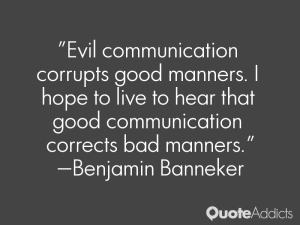 Two current events and one ho-hum event from my every day life. First, riots in Baltimore that include destroying property and looting businesses, physically assaulting innocent people, and critically injuring a police officer. Second, A professor at Texas A&M University in Galveston fails his entire class as his last official act before quitting his job, citing a pervading attitude of insolence, cheating, and extreme disrespect in his class. Third, A substitute teacher at a local high school in a Houston suburb. An entire class of students refuse to do their work. They are disrespectful, mouthy, and call their substitute teacher vulgar names as they exit the classroom. What do these three events have in common? Two current events in the national news and one event in the humdrum, perhaps mundane events of my own daily life. What do they possibly have in common? One common trait from each event that stands out to me is this: they all exhibit many of the same behaviors. Rude, disrespectful, inhumane, mean-spirited, self entitled, self-centered, and sometimes criminal. Just bad manners. Period. They are from all walks of life, different races and ethnic backgrounds, men, women, boys, and girls.
But why are they acting like uncivilized human beings devoid of decency and humanity? Please don’t say they were rightly provoked by the incident surrounding Freddie Gray’s death. How could that possibly explain stealing and thievery, arson, and assault? Surely no reasonable person could excuse that sort of behavior or perceive it to be “ok” in any case whatsoever? And if you can excuse this criminal behavior, then you must also believe that a civilized society is completely incompatible with one that does not allow the freedom to commit crimes under extreme duress. I would think especially if one of the looters or arsonists or physically combative persons in Baltimore were truly indignant over an alleged act by the police which they felt to be criminal in nature, surely that person of all persons, would be completely opposed and have an aversion himself to committing a crime that he (or she) personally finds so appalling. Right? Then there’s the college classroom in Galveston. Here’s a teacher who has no history of indiscriminately failing students. By all accounts he appears to be a decent human being and teacher, above reproach in his place of employment and his community. He said “I was dealing with individuals swearing at me both in and out of class and it got to the point the school had to post security guards in this and another class.” He further claimed that the students had spread online rumors about his wife and added that their immature and incompetence would hamper their efforts at entering the professional work force. Then there is the substitute teacher abuse. Multiple classes. Multiple students. Refusing to do class work for no other reason than they simply don’t want to. Calling the teacher names like “nasty ho,” an act that if it were reversed would get the substitute teacher fired for sure.
Really how has it all came to this? But I know this is not new. People, citizens, have been acting this way for centuries. But here’s the thing. As society has progressed over the last century, there is an expectation or a belief, perhaps too unreasonable of one, that people grow and mature at the same rate as their civilized society grows. In others words, there is a general sense among Americans that we are not the “same” unlearned, prejudiced, imperialistic nation that we once were. That along with astronomical growth in areas like technology, space exploration, medical advancement, great educational strides, scientific discoveries, we are also growing and maturing as humanitarians, as generous and compassionate adults. Unfortunately this is not always the case. The former does not = the latter. In all three of these cases-two current events and my one “ho-hum” day-to-day life event, we are dealing with men and women, boys and girls, young and old alike, whose moral compass is virtually absent. The only compass they have as a guiding point is the one guiding them to ill-gotten gain, and the shortest route to satisfying their own selfish wants and desires. Whether that is a big screen tv in a looted and burning business in a district like Baltimore where political unrest has afforded a target of opportunity to combatants and aggressors to do what they might have done otherwise, or a classroom of students who just want to “goof off” and accuse their teachers of being lame or somehow beneath them, in lieu of working, studying and putting their parents’ tax school dollars to proper use. In the case of the college students, their moral compass was so absent that their teacher feared for his own life and felt his only recourse to protecting himself as well as his wife’s honor was to quit his job.

In 1995 I had five co workers killed in the Oklahoman city federal building, 5 best friends. I also watched my parents die as a five-year old. They drowned in a senseless accident in front of my eyes as I stood helpless on the shore with my two sisters. This event led me down paths for years to come that I found very difficult to navigate. In my life, I have been hurt by others, betrayed by some, beaten down by circumstances. Yes. But never once was I driven by my pain, betrayal, or my lot in life to loot and burn businesses to the ground, to physically assault any innocent person, including a police officer. Never once did I find it necessary or right to mouth off to a teacher, terrorize them through social media or bully adults and peers. Even someone I did not like. Never. One. Time. That’s not to say I have never been disrespectful. (If only..) It is to say that disrespect was never excused by my circumstances.
I would submit that the ones who truly care about Freddie Gray and the circumstances surrounding his death are not the ones burning down buildings and looting and stealing and assaulting police officers. No I do NOT for one minute believe that those persons perpetuating crime and violence, and terrorizing their own communities, in which they live, are the ones who give a flip about Freddie Gray. Neither my anger, my indignation, my position-wrong or right, my political beliefs, my sexual persuasion, my marital status, my lot in life, my age, my gender, my grade in school, my disagreements, my agreements, my height, my weight-Nothing. Not One Thing. No incident, tragic or joyful in my life has ever, ever persuaded me to destroy buildings, physically assault people, or treat teachers disrespectfully just because I can. My freedom was paid for with a high price. That price was too high for me to turn around and loot, burn, and hate. That is most assuredly not how I say thank you for my freedom. It is not how I choose to exercise my freedom or my rights. I simply never have a right to do what is wrong. I always tell my girls, “Do the next right thing.” That is not about following the rules, although rules are good things. It is about exercising common sense and compassion.

Finally, where are the parents? Yes, I know it’s usually what I end with. I can’t help myself. Too many parents have too many priorities that don’t include rearing a child that is a generous and compassionate adult, and simply respectful of others. Absent fathers keep piling up along with disrespect and bad manners. And as long as they do, it will be difficult to find good candidates to teach our children, police our neighborhoods, hold town hall meetings, and to lead our communities into the future, a future that should be full of continued advancements in technology, but also one full of hope, living in a place where we feel safe and secure.