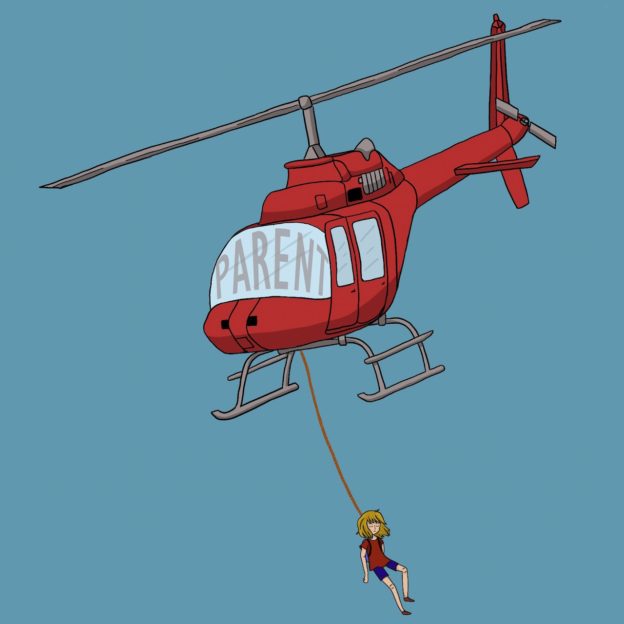 Just when I think the term helicopter parent has been exhausted, then I meet another one. Before we talk about the dangers of hovering and how not to be so over-controlling, I think it is important to address why we might be tempted to be so in the first place.

Possible reasons for being a hovering parent, and there could be overlap:

Let’s be clear. There’s a difference between advocating and hovering. Recently I knew of a young boy who called his mom to pick him up so he didn’t have to go to his sporting practice.  He wasn’t sick. He just didn’t want to go. She did it. She picked him up. That’s hovering. I listened to a birthday prank on the radio this morning. The DJ told the father on the phone that the game system he had purchased for his son for Christmas was on back order. With no other provocation, the dad dropped two expletives 60 seconds into the phone call about how he needed that game system for his son by Christmas. That’s hovering. (And rude). A couple of weeks ago, a young and brand new teacher friend of mine sent a note home to a mama that her daughter had used permanent markers to draw all over the class room bean bag chairs. The chairs were ruined. Mom sent a note back and said “I thought they were supposed to get three warnings.” That’s hovering. How many parents have stormed into public school buildings angrily demanding to know why their kid didn’t get the part or the position or the award he should have. That’s hovering. At the park, I saw a toddler fall down, suffer no physical damage whatsoever, other than wounded pride, and his mom went busting over to rescue him. The rescue consumed at least 5 full minutes and led to the conclusion of play time at the park for the day. That’s hovering. Someone showed up at her son’s job interview. (Literally, this happened). How many times have we given into temptation to shower our college kids with cash at the drop of a hat or been tempted to usurp their abilities to take care of their own college business? That’s hovering. Maybe you over involve yourself in your adult child’s business. You just can’t afford to let them live their own life. They might mess it up. That’s hovering.

As I already mentioned, there is a difference between advocating and hovering. We can and should be advocates for our children. And even our young adults. But did you know that advocating for your child doesn’t just happen in a necessary conversation with another individual about something that concerns your kid? No not even. We advocate best for our kids in conversations we have with them. (Parenting tip # 23 in my book.) Instructional conversations, life giving conversations. Conversations about expectations and consequences. If your daughter attends college 15 hours away from you and goes to an ATM machine at night by herself with an unsavory character lurking nearby, you would be at your advocating best if you were there in the parking lot with her at the time of the event right? Yes for sure. But the conversation you had with her years prior that warned her of the dangers of going to ATM machines alone at night, that was you advocating for her in the anticipation of events yet to happen. Yes, conversations we have with our kids by the truck load-that’s us advocating for them. Newsflash. They are going to be out doing their life away from us, at some point or another, whether we advocated for them in this way or not. If we spent those years hovering rather than advocating, well, it could be a rough ride. If you want your kids to be productive, positive, empowered adults, then when they are young quit bailing them out. (Parenting Tip #10)

The difference between advocating and hovering is measurable and quantifiable. Over controlled kids are more anxious, misguided and have low conflict resolution skills. This equates to problems in the classroom and in personal relationships, perhaps sadly, for years to come. In an article in Psychology today dated August, 2016 by Nathan H. Lents, Ph.D., Dr. Lent states:

“Helicopter parents that seek to shield their children from all forms of adversity are not doing them any favors. Physical exertion, confrontations on the playground, competitions with real winners and real losers, getting minor bumps and bruises, and even periodically experiencing fear are all inducers of acute stress. Falling off of a swing, for example, teaches a kid a variety of lessons that just can’t be learned any other way. If kids are protected from all possible risks when the stakes are low, how will they navigate risk-taking when they are older and the stakes are much higher? While we should all strive to protect children from chronic stress, depriving them of healthy forms of safe stress may leave them unable to deal with stress as adults.”

Kids, whose parents are healthy advocates, are typically better adjusted emotionally. They can navigate disappointment in life, because they have been allowed to be disappointed and even at times, bored. They have not been routinely bailed out. They have had to use their imaginations when they didn’t get every single new thing they wanted for Christmas or their birthday. They are kids, whose parents are not perfect, but neither do they lead lives defined by past hurt, trauma or failure. Advocating means these parents choose not to teach or discipline or love their kids through the lenses of comparison, bank accounts, fear, entitlement or bitterness. Parents who advocate for their children verses hovering realize that their child’s love for them is not fragile. They know that just because they discipline them for falling out of line, doesn’t mean their kid will fall out of love with them. Advocating versus hovering. It’s critical that we can distinguish between the two. It can make a world of difference in the adult your child becomes down the road.